Where We Came From

As early as 1846, Germans of both Lutheran and Reformed traditions settled in the area of Zurich. Many came to find better economic conditions, others to avoid compulsory military training. The areas of which these earliest settlers came are as follows: Hessia, Baden, Prussia, Alsace-Lorraine, Mecklenburg, Bavaria, Saxony, Schleswig-Holstein, Hannover, Wuerttemberg. As well some came from Waterloo county and Pennsylvannia.

These pioneers were served by Pastors of neighbouring congregations as early as 1854. The Pastor of the congregation of New Hamburg, Pastor L.H. Gerndt, was one of the Pastors who journeyed to Hay Township to serve the people in word and sacrament. He saw the need of a full-time pastor – he wrote, “In Hay Township, which place I once visited last winter, a pastor is much needed to preserve the very existence of the church.”

In 1860 the Canada Synod was a conference of the Pittsburg Synod. In the minutes of the Pittsburg Synod, 1861 it is stated, “Immediately after the adjournment of Synod the Rev. I.N. Muenzinger was commissioned by the mission committee to the charge of the Hay Mission, Canada West. A few weeks afterward he was duly installed as pastor of the German Lutheran Church in Zurich by the brethren Hengerer and Koessmann.”

In the same minutes read, “St. Peter’s Lutheran Church in Zurich, Hay Township is of wood, plainly but neatly built, dedicated on the 12th of August, 1860.” This first church was located on Lot 34 of what is now John Street near the corner of Edward Street. The first burial, a child (Elizabeth Hill), took place on August 15, 1860. The first wedding (August Rauh and Catherine Burkholder) was performed on March 5th, 1861. The first class of 22 young people was confirmed on April 7th, 1861.

The congregation was organized as a union church, and adopted its constitution on January 1, 1861 as the “Evangelical Lutheran and Reformed Church.” This was also the same year as the founding of the Canada Synod. These first years are marked by vigorous discussions between those of Lutheran and Reformed background. As a result of separation between the Lutheran and Reformed took place during the pastorate of F.C. Ehinger (1865-1867), who succeeded Rec. Muenzinger who left in 1864. The Sunday School was organized in 1865 with its first superintendent, Fred Hess, who remained in office until 1915. He also served as organist for many years.

In Search Of A Pastor

From 1868-1870 the pastor was G. Sagehorn. Following his departure, the congregation provided a lay reader until Rev. D. Schall arrived in 1870 and stayed until 1872. A Rehn became pastor until 1873. Because he was not a member of synod, the congregation considered separation from synod. However it was decided instead to ask him to leave and remain loyal to synod. The Rev. A. Vockrodt served the congregation from 1873-1875. He served a mission congregation on every sixth Sunday. Following him, the Rev. G. Schoemperlin was pastor for only one year. 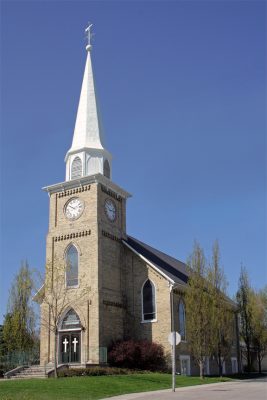 In 1877, Pastor I.N. Muenzinger was again called and served until 1882. It is a tribute to Pastor Muenzinger that he who had organized the congregation and saw the building of the first church, should accept the call at this time, for the same year it was decided to build the present brick church south of the parsonage on a lot obtained from John Deichert. The church was designed by George Hess and the contract was given to H. and J.C. Kalbfleisch. The building committee consisted of Fred Hess, H. Wurm, H. Weseloh, Charles Schroeder, and P. Rothermel.

The building was completed in 1878 and the large bell was installed in the tower. The tall spire, visible to the surrounding community, is a living testimony to the devout faith of these forefathers, and a constant reminder of God’s dwelling place to future generations. The new church was consecrated on the First Sunday in Advent, 1878. A school room was attached to the West end in which the beginner class met on Sundays and the confirmation class on week days. In the early years, in addition to Catechetical instructions, the learning of the German language was emphasized.